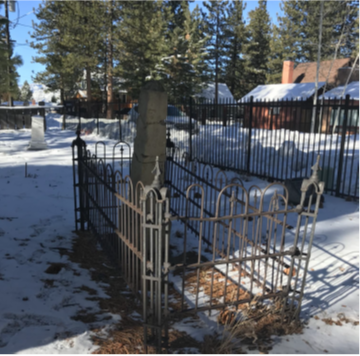 The Al Tahoe Pioneer Cemetery is the only historic cemetery in the Tahoe Basin and was established in the early 19th century. The cemetery is located at 790 Alameda Avenue in South Lake Tahoe. The earliest known burial was in 1861 and the last known burial was in 1959. Through ground penetrating radar it was discovered there are 112 burials. Of those burials, 12 are known and have grave markers, 25 are known to be buried but in unknown locations and 75 burials are unknown and unmarked.

In 2018, several groups with an interest in restoring and improving the cemetery formed a group called the Al Tahoe Pioneer Cemetery Improvement Committee (ATPCIC) they include representatives from the Daughters of the American Revolution, Lake Tahoe Historical Society, and the Kiwanis of Tahoe Sierra.

On May 3, 2022, The group entered into a formal agreement with the City of South Lake Tahoe for the purpose of soliciting funds through a variety of fund-raising events and grants to complete restoration and improvement projects.

How to Donate to the Al Tahoe Pioneer Cemetery Improvement Project

The City of South Lake Tahoe is responsible for the ownership and implementation of all improvement projects including annual maintenance of the site. The ATPCIC under the Lake Tahoe Historical Society will solicit funds specifically for this project.