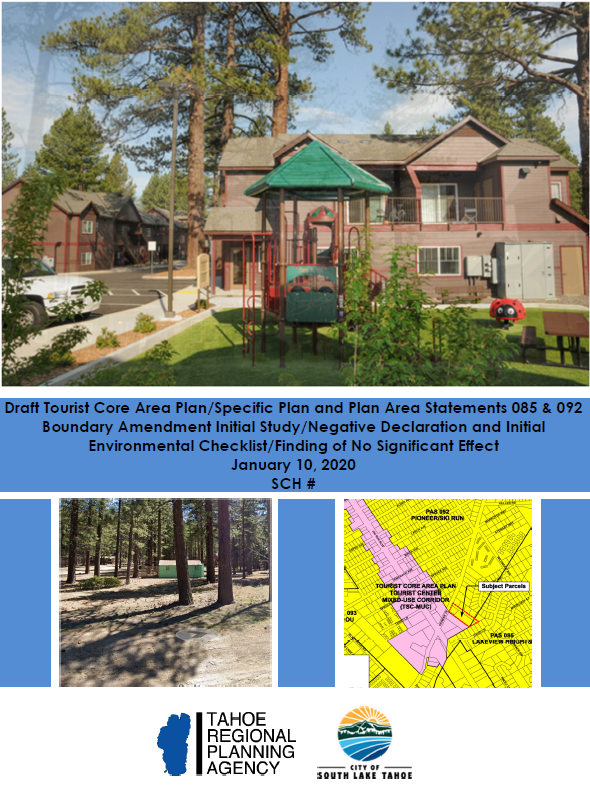 The City and TRPA have prepared a joint environmental document consisting of an Initial Study/Negative Declaration and Initial Environmental Checklist/Finding of No Significant Effect (IS/ND and IEC/FONSE) for the proposed TCAP and PAS 085/092 amendments in compliance with the California Environmental Quality Act (CEQA, Public Resources Code Section 21000 et seq.), CEQA Guidelines, and TRPA Code of Ordinances and Rules of Procedure. The IS/ND and IEC/FONSE are being circulated for public review and comment pursuant to Section 15073(a) of the CEQA Guidelines. The 30-day comment period for the ND and IS begins on January 10, 2020, and ends on February 10, 2020. Comments should be submitted to the City at:

The City of South Lake Tahoe Planning Commission will hear a presentation on the proposed amendments at their regularly scheduled meeting on Thursday, January 16, 2020 at 3:00 p.m. (the Planning Commission Agenda and staff report will also be available at the City Services Center three days prior to the hearing). The hearing will be held in the City Council Chambers at 1901 Lisa Maloff Way, South Lake Tahoe, CA.

The City of South Lake Tahoe (City),Tahoe Regional Planning Agency (TRPA), Tahoe Transportation District (TTD) and Pacific Development Group (PDG) are seeking public scoping comments on a joint proposal to amend the boundaries of the City of South Lake Tahoe Tourist Core Area Plan/Specific Plan (TCAP), the Pioneer/Ski Run Plan Area Statement 092 (PAS 092), and Lakeview Heights Plan Area Statement 085 (PAS 085). The proposed amendment would amend the TCAP boundary to incorporate three parcels located in the PAS 092 and PAS 085. The parcels to be incorporated into the TCAP are APNs 028-081-02, 028-081-04, and 028-081-15. The three parcels total 1.61 acres in size and are located east of the intersection of Ski Run Boulevard and Pioneer Trail and abut the TCAP boundary. The purpose of the proposed amendment is to facilitate the development of affordable community housing, and the amendment would enable an increase in land coverage, height, and density to permit the potential development of approximately seventy-seven (77) multi-family dwelling units on the subject parcels when combined with two other parcels currently located in the TCAP.

One parcel (APN 028-081-15) is entirely located in PAS 092. Two parcels (APN 028-081-15 and 028-081-02) are primarily located in PAS 092 with a small southerly portion of the parcels located in PAS 085 (see Existing Area Plan/Plan Area Boundaries Map below). Multi-family is an allowed use in PAS 092; however, only at a density of 15 units per acre. Multi-family is not a permissible use in PAS 085. Some commercial uses are currently allowed in PAS 092 with a Special Use Permit. One parcel currently sits vacant, one is developed with two small cabins, and the third has an existing dirt road that provides access to five parcels located just east of the subject parcels. The subject parcels are surrounded primarily by single-family residential uses to the north, east, and south and to the west by a vacant commercial parcel and existing commercial uses. Parcels adjacent to Ski Run/Pioneer intersection include an existing firehouse and the Aspens affordable multi-family housing development.

Note 1 - Per the TRPA Code of Ordinances Section 31.4.1, affordable housing developments may be eligible for a 25% increase in density (or 18 units per acre) for areas outside of an adopted area plan.

Note 2 - Per the TRPA Code of Ordinance Section 37.4.1, maximum height is calculated based on percent slope across a building site and proposed roof pitch. 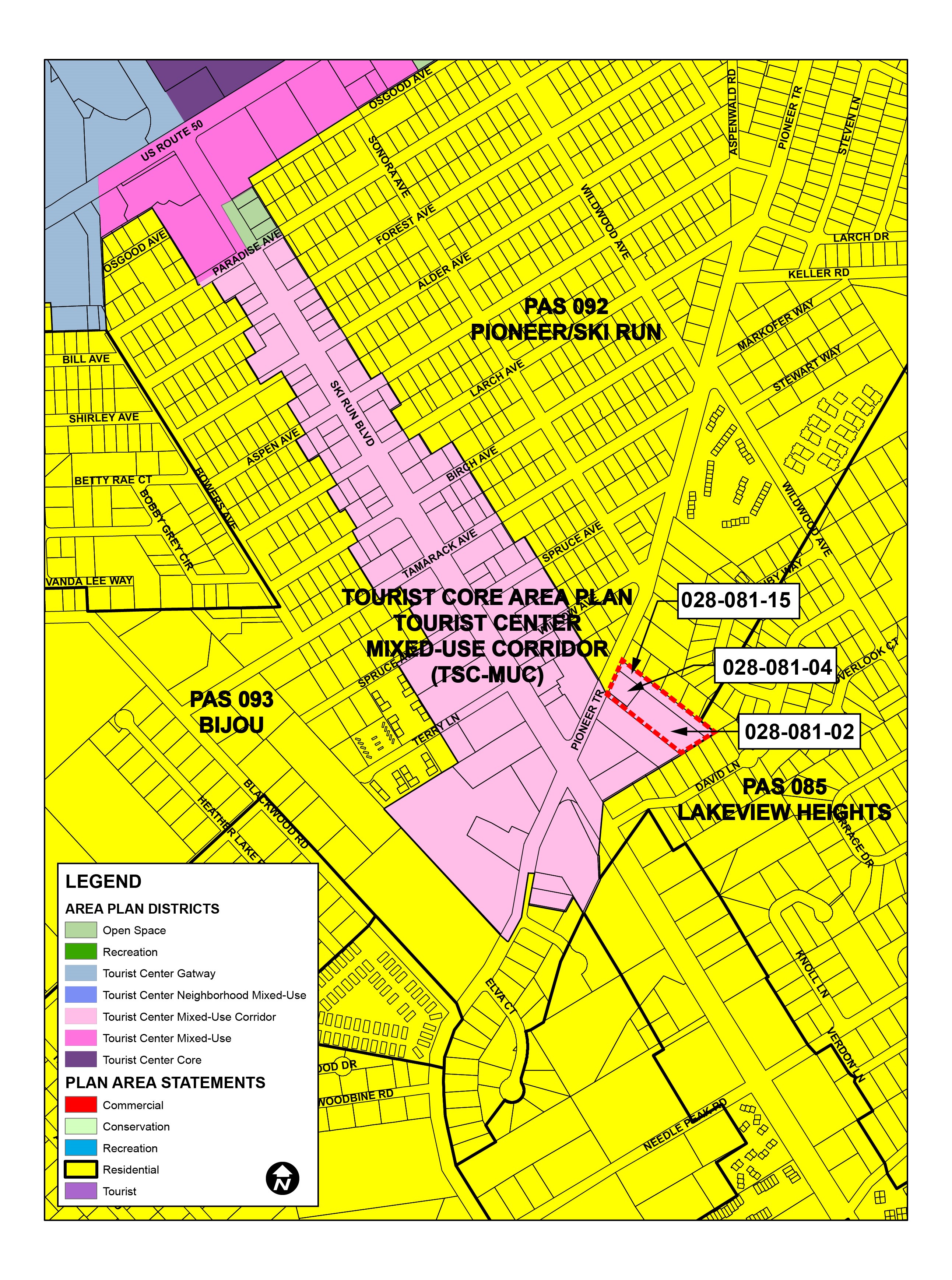